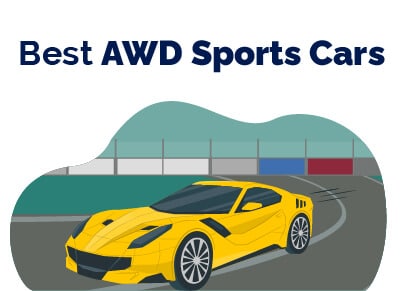 All-wheel drive, once a novelty, has come to nearly every class of car - from compact sedans to minivans to - you guessed it - sports cars. Among other benefits, all-wheel drive factory hot rods offer serious grip and all-season performance. For more performance, check out the benefits of nitrogen-filled tires.

Unlike some other segments, all-wheel drive sports cars aren't exactly new. You don't need to be on a Ferrari waiting list to enjoy all-weather traction in your weekend driver.

We've taken a hard look at the latest and greatest within this small but growing niche. 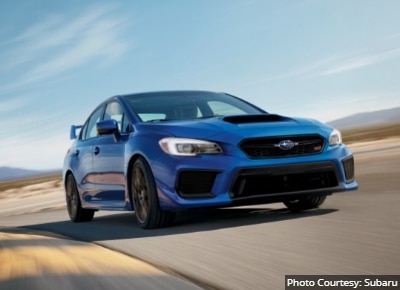 We know what you're thinking: a four-door Subaru sedan on a list of sports cars? We promise this isn't as incongruent as it seems. Subaru's WRX STI is a veritable sports car, only wrapped up in the rather demure body of a four-door sedan.

The WRX has long been Subaru's rally special - a small, all-wheel drive, rowdy little four-door. It isn't fancy, isn't brimming with technology, and isn't even styled to look fast. But fast it is, especially in STI trimmings. See the difference between the WRX and STI here.

The STI is home to a 305-horsepower turbocharged flat-four. This, in a car weighing hardly more than 3,000 pounds, is enough to give this car real gumption powering out of a turn. The excellent grip from Subaru's all-wheel drive system means corners are taken flat. A slick six-speed manual transmission provides exactly the sort of tactile feedback you expect from a sports car.

Another perk of the WRX STI? It's an ideal daily driver, thanks to its four doors and ample grip. The all-wheel drive system provides great dry-weather traction in corners and also cuts through snow, mud, and slush with ease. And there's enough ground clearance to go romping in an unplowed parking lot when the temptation arises.

Considering the cost of entry for most all-wheel drive sports cars, the WRX STI is the everyman's choice; a way for the rest of us to enjoy the thrills of a fast car with oodles of grip. 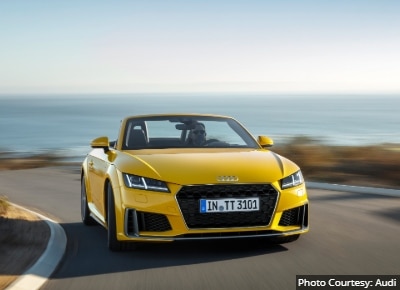 Looking for something one-of-a-kind that is both fun, approachable, cool, and even a little practical? Try the Audi TT on for size. This little coupe has been around for over two decades now, always occupying a unique spot in the Audi lineup. It isn't a sports car in the same sense as the M4, but neither is it akin to a two-door VW Golf Cabriolet - that is, cute and harmless. It's a sporting car with a sporting demeanor. It just isn't as hardcore as some of the other cars on this list.

That said, the TT RS is still quite the barnstormer. It uses a turbocharged five-cylinder that makes north of 400 horsepower. Yes, you read that right - five cylinders. It's a unique arrangement that provides a very distinctive aural and tactile feel; you won't confuse it for a four- or six-cylinder engine. In a world where automotive engines are largely falling into a few neat categories, an oddball like this is worth praising - especially when it's this fun to throw around.

Lower-spec TT models use a more typical turbocharged four-cylinder, lending them a more relaxed feel. But they still provide an entertainment value that is commensurate with the slick, sporty styling that envelopes the TT's chassis.

The TT's cabin boasts a luxurious, driver-oriented setup that doesn't even feature a touchscreen. Instead, Audi routes all the infotainment controls through the MMI digital gauge cluster. Passengers might not like it, but it makes for an exceedingly clean dashboard design.

Luxury, fun, and style - it's all here. For those who want a low-slung sport coupe with a renowned all-wheel drive system, the TT is an excellent choice. 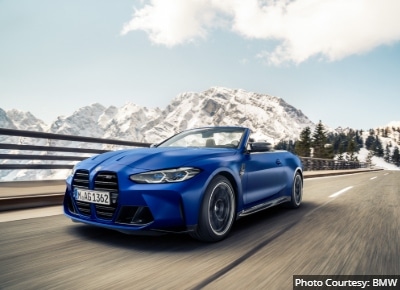 The BMW M4 - the two-door variant of the iconic BMW M3 sports sedan - has a reputation for being a tire-shredding, tail-out, slide-happy rear-wheel drive sports car. So what's it doing on this list? Well, the all-new 2022 M3 and M4 Competition are offering optional all-wheel drive for the first time.

It isn't as sacrilegious as it seems. The BMW M5 first broke the mold in 2018 when it came standard with all-wheel drive. But BMW's system isn't exactly the same as that found in a Honda CR-V. Using trick electronics, M4 drivers can adjust the power split between the front or back, with up to 100 percent of power capable of being sent rearward. Electronic torque-vectoring further adjusts how much power is sent to the inside wheel during a turn. The result of all this trickery is a coupe that combines the grip of all-wheel drive with the neutrality and cornering response of a rear-drive car.

Under the hood of the M4 is a twin-turbo 3.0-liter inline-six making 473 horsepower in its standard-output tuning. The Competition models - the only way to get all-wheel drive - bring 503 horsepower. You'll have to forgo the six-speed manual that comes with the base-spec cars, though.

BMW M models have always been a special breed of muscular, clothing their grunt in a sharp three-piece suit. The interior has all the luxury trappings of the ordinary 4-Series models, with the only giveaways are the highly bolstered seats and carbon-fiber trim.

Back in the day, luxury sport sedans weren't a thing until the 3-Series came along and upended the game. Today, BMW's suave sport coupe has evolved into a proper sports car, equally at home on your favorite track and favorite backroad. With newly available all-wheel drive, this German icon is only that much more capable and effective. 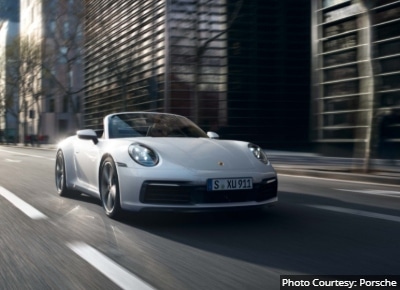 Perhaps the most iconic car on this list. Porsche embraced all-wheel drive early - as far back as the mid-1980s with the 959, and then later with the first all-wheel drive 911 Carrera 4 in the early 1990s. 911s with all-weather capability have since been offered with every successive generation of Porsche's flagship sports car.

The 911 pairs especially well with all-wheel drive on account of its rear-mounted engine. Because of the inherent weight imbalance of such a design, driving the front wheels and the back helps with dry-weather grip and neutralizing cornering performance. Old 911s were notorious for oversteering; modern models aren't nearly as bad, but the Carrera 4 and other AWD models are particularly stable and unflappable.

In the Carrera 4, Porsche provides a turbocharged flat-six engine making 379 horsepower. This is the lowest tier of horsepower within the 911 range; if you want more power with all-wheel drive, you can step us to the 4S, GTS, or almighty Turbo. Plan on 473 horsepower with the GTS and over 600 horses with the Turbo.

As for the driving experience, what's to say that hasn't already been said? The 911 is peerless in its refinement, sophistication, and speed. It is performance perfected. If anything, the car has grown too stoic - triple-digit speeds can feel uneventful thanks to how stable and composed the 911 is at speed.

The cabin is also a study in top-notch design and materials. The current generation is more tech-forward than ever, but it still maintains that intimacy so crucial to a sports car. And there's just the right amount of analog in the mix as well, at least with the optional Sport Chrono package and its exclusive dash-mounted clock and timer.

The one issue with the 911: price. At over $100,000 to start, we hesitated on even including it on our list. But how could we not, when this might be the highest ideal of the all-wheel drive sports car? If you're looking for a cheaper option, check out our list of the best AWD vehicles under $30K.

It depends on your budget and preferences. If you're trying to pinch pennies, the Subaru WRX STI will both tackle your commute and fulfill your inner hooligan.

Those with deeper pockets will want the Porsche 911 (our advice - get the GTS trim). The Audi TT and new BMW M4 Competition are excellent options for enthusiasts who appreciate exclusivity, performance, and panache.

What are the benefits of all-wheel drive?

The extra traction from driving all four wheels means better grip in both dry and inclement weather and more control and stability through corners. Sports cars with AWD won't be so prone to sliding out of a corner if you get on the gas too early, enabling you to carry higher speed through turns.

In winter, yes - you'll be happy for the extra grip whenever you run into snow or slush. You also might appreciate the lack of theatrics when launching an all-wheel drive sports car. But those who enjoy donuts, drifting, and burnouts will want to stick with rear-wheel drive. On a more practical note, all-wheel drive decreases gas mileage and adds curb weight.

The extra weight of the all-wheel drive componentry, as well as the additional driveline friction, make your engine work that much harder. Typically, most cars and crossovers suffer a decrease of 1-2 mpg when ordered with all-wheel drive instead of front- or rear-wheel drive.

What's the difference between all-wheel and four-wheel drive?

Four-wheel drive is used by trucks and SUVs. This is a more robust, heavy-duty system designed for severe off-road conditions. Proper four-wheel drive includes a transfer case with an extra set of gear ratios that are to be used during low-speed, off-road maneuvering.