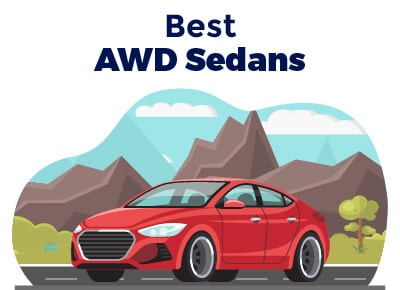 The sedan, once the most popular car type, now seems to be waning. But looks can be deceiving.

The market is seeing a resurgence as manufacturers start adding all-wheel drive to the four-door car. Many consumers buying SUVs and crossovers were doing so because they wanted the stability and all-weather handling that all-wheel drive (AWD) provides. Where previously AWD was only to be found on sport and luxury sedans, it’s now becoming common in everyday cars as well.

We’ve ranked the best sedans on the market with AWD as standard or an option for this list. We’re looking at all sizes of sedans in the standard and luxury markets.

What Is a Sedan?

A sedan is loosely defined as a four-door car with a separate trunk or cargo space. That latter distinction has, however, blurred a bit as some sedans now feature rear hatches instead of a separate deck or trunk lids.

AWD is a relatively common form of four-wheel drive in which the powerplant and transmission propel all four wheels. However, unlike a true four-wheel drive system, an AWD system does not usually feature low gearing (adding more torque at low speeds) or force a 50:50 power split between axles. All-wheel drive is more typically associated with unibody designs instead of truck-based or body-on-frame vehicle designs.

In general terms, AWD is better for performance driving in sport or casual situations where traction and handling are of primary importance. In many situations, AWD is also better for general all-weather driving as well for traction control purposes. 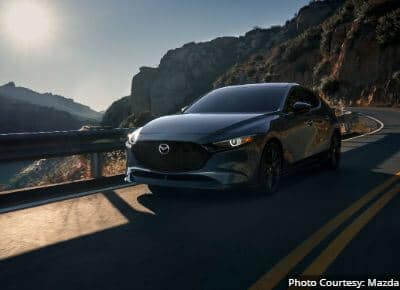 The Mazda3 comes in both sedan and hatchback formats, and this isn’t the first time it’s made one of our “best of” lists. In hatchback form, the Mazda3 made our Best Hatchbacks list, and in its sedan form, it’s topping this list as well.

With the 3, Mazda has found a nice balance of capability and fun. A new turbocharged engine, while not required to make the Mazda3 great, is certainly a very nice addition. Both the 2.5-liter standard and turbo engines have an AWD option which, while sporty, is more tuned towards all-weather driving than sport driving performance.

The Mazda3 is also the only compact on this list, and those looking for more room should consider its hatchback as an option. 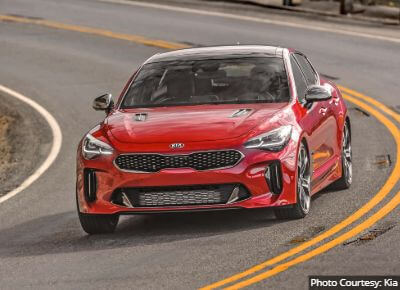 The Kia Stinger is relatively new to the sedan market, debuting just a few years ago and still being in its first generation as a car. With many things in common with the Optima sedan, the Stinger is sportier and more luxurious. Compared to other luxury cars, it fits better in the “premium” non-luxury market than it does the lux stable. So we’ve put it here.

The AWD option for the Stinger is available in both the four- and six-cylinder engine choices. Although the Stinger is marketed as a sports sedan, it’s not as sporty as most of the other options on our list here and is, instead, a comfortable grand touring car. Because of its rear-wheel base, however, the Stinger is still more performance-oriented than all-weather oriented with its AWD setup.

Of the three on this list, the Stinger is the most comfortable and poised for everyday driving. Infotainment is user-friendly and not intrusive, while cargo is spacious and useful.

You may qualify for deals and incentives, check out this month's Kia deals here. 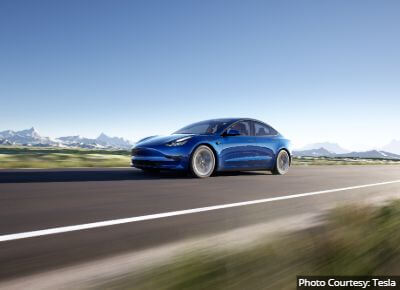 The Model 3 is the only electric vehicle on our list today. Price-wise, the Model 3 is costlier than even our luxury options below but is outfitted more like a premium-level standard offering than a truly luxurious sedan. That said, it has a lot of driving range and an extremely well-done AWD system.

As the highest performing car on our list, the Model 3 is the most lead-foot friendly. Fuel economy, as with any EV, however, drops significantly as speeds increase, and unlike combustion-powered vehicles, the Model 3’s electric system loses efficiency at highway speeds as range drops.

The AWD system in the Model 3, however, is uniquely axle-independent when compared to the others on this list (luxury or no). Each axle has its own independent propulsion, giving the AWD system the ability to adapt to road situations more quickly. That said, the rear-wheel bias of the car and its overall design are geared more towards performance than all-weather handling. 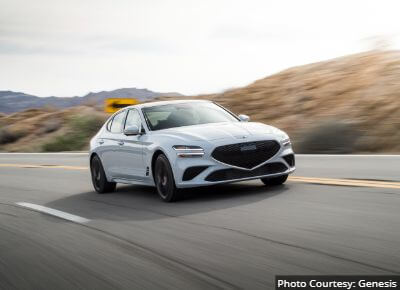 The newcomer to luxury vehicles, Genesis is the luxury arm of Hyundai. The G70 is a flagship for the carmaker, aiming for affordable luxury and performance. Those goals are certainly made with the new G70, which offers a nimble road presence and a lot of standard features for the price paid.

Both the 2.0-liter turbocharged four-cylinder and 3.3-liter twin-turbo V6 have an all-wheel drive option. The base engine is a great choice for daily driving and saloon-style comfort, while the V6 offers blistering sprints and confident high-speed appeal.

Although the G70 is very athletic, its AWD system seems tuned more towards handling inclement weather than performance. Outside of its low-speed jump where traction is most crucial in performance driving, the AWD system feels more all-weather tuned. 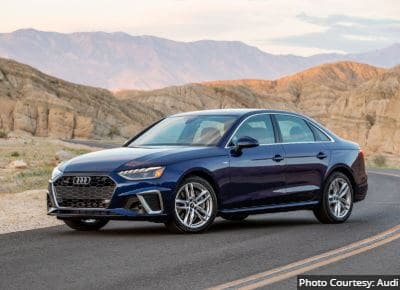 On our luxury list, the A4 is both the smallest and the most performance-tuned of the group. It’s also the only sedan on either of these lists that has AWD as standard. Audi calls its AWD system “quattro”.

The Audi A4 is a small car with seating for four comfortably and five when required. However, it is athletic and fun to drive with a lot of engagement for the money spent, especially if one opts for the turbocharged six-cylinder engine choice.

The Audi’s drivetrain is clearly geared towards performance, with all-weather handling being secondary at best. 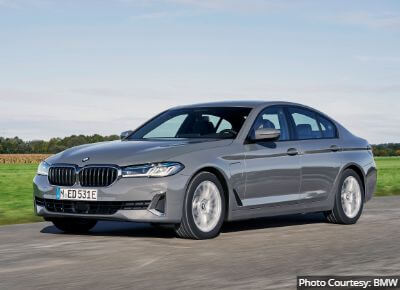 The 5 Series is one of the longest-lived of luxury sedans on the market today. It’s also one of the most versatile, with options and setups (denoted by model number) to fit nearly any lifestyle or need. The standard models (530i, 530e, 540i) have four- and six-cylinder turbocharged engines (respectively), while the M series (M550i, M5, M5 Competition) have burly V8 engines with various turbocharged outputs.

For all-wheel drive, BMW buyers will be limited (such as that word applies here) to the 530i, 530e, and 540i models. These are well-balanced, nicely-tuned touring cars with a smart design that fulcrums power output and handling with comfort and daily convenience.

The electrified plug-in hybrid 530e is an especially compelling option here, adding both gasoline-boosted performance and convenience with the efficiency of around town all-electric driving.

You may qualify for additional deals and incentives, check out this month's BMW deals here.

What is the best overall AWD sedan?

With the 3, Mazda has found a nice balance of capability and fun. While not required to make the Mazda3 great, a new turbocharged engine is certainly a very nice addition. Both the 2.5-liter standard and turbo engines have an AWD option which, while sporty, is more tuned towards all-weather driving than sport driving performance.

What is the best AWD sedan for everyday driving?

The Kia Stinger is the most comfortable and poised for everyday driving. Infotainment is user-friendly and not intrusive, while cargo is spacious and useful.

What is the best AWD electric sedan?

The Tesla Model 3 has a lot of driving range and an extremely well-done AWD system.

What is the best AWD luxury sedan?

The Genesis G70 is a flagship for the carmaker, aiming for affordable luxury and performance. Those goals are certainly made with the new G70, which offers a nimble road presence and a lot of standard features for the price paid.