Top 5 Symptoms of a Bad Starter 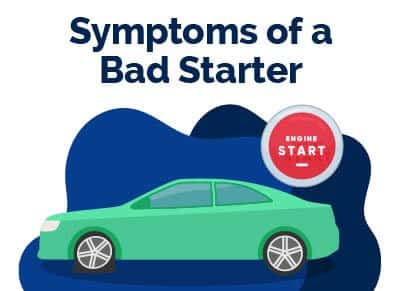 It's a common problem that most of us have encountered at one point in time. You put your keys in the ignition to start your car, but it won't start. And you’re stranded, not knowing what to do.

Today's cars, trucks, and SUVs have a starting system attached to the motor's rear. This component moves along with the vehicle's flywheel to start the engine.

Once the engine turns over, the fuel is ignited by the activation of the ignition system. However, if the starter gets worn out or breaks, it can prevent the car from starting.

Symptoms of a Bad Starter

Like other mechanical components, the starter will give signs before going completely bad. Here are six signs that your car's starter might be damaged:

When you hear a whining sound while turning the ignition on, your car won't start. This is usually caused by the failure of the starter to engage the flywheel.

This issue could require replacing the entire component. If you have freewheeling problems, make sure that you inspect your vehicle to identify the cause of the problem.

2. Strange Noise When Starting the Car

The first sign that your car's starter might be in trouble is unusual sounds when you press the start button or turn the key.

These sounds can be caused by the component or the vehicle's condition.

For example, some cars may skip clicking sounds and go straight to more unsettling noises, which could be caused by the starter being badly damaged.

The sounds often start when the drive gear does not engage well due to the starter's age and wear.

The other signs that your car's starter might be in trouble are the strange sounds when you turn the ignition again.

3. The Starter Remains on After Igniting the Vehicle

The car's starter will automatically stop working after you release the key or the start button.

If this happens after the engine has started, this could be a sign that the car's starting system is in trouble.

You need to contact a mechanic to remove the starter motor from its position. However, doing so could cause damaging effects on the car's components.

The system of a car depends on electrical procedures, which can lead to short circuits, blown fuses, and other electrical issues.

For example, if a part of the electrical system gets too much power, it may overheat and blow a fuse.

This can be caused by various factors, such as the prolonged use of the vehicle or the connection problems between the engine and the other components.

If you smell smoke coming from under the hood, it's a sign that your car's starting system is in trouble. You should immediately contact a mechanic to address this issue.

If you hear these symptoms and suspect your car has a problem, such as a faulty starter, you should immediately remove the cover and inspect the area where the issue originated.

You should also avoid starting the vehicle again if you have found the starter drenched in oil. It's usually a result of a burst pipe or a hose leaking oil.

Before you start the car, you must identify the source of the issue and fix it.

What Are the Signs of a Bad Starter Solenoid?

These include the lack of power and the strange sounds when the car is started. These are the symptoms:

1. Successive Clicks and Grinds When You Turn the Ignition Key

Sometimes, the starter motor will grind or click during a specific time, which suggests that the component is holding back because it's not getting enough power.

The most common cause of this issue is the worn-out or welded contacts at the starter.

Other factors, such as loose connections, can also affect the power transmission of the starter.

The lack of power can lead to the dissipation of the low mechanical force required to start the car. This issue can also cause strange noises when the vehicle is started.

2. The Starter Solenoid Makes a Clicking Sound, but the Starter Does Not Rotate

If the car doesn't start after clicking the ignition, it's a sign that the connection between the starter and the other components is broken.

Other factors, such as corrosion and electrical issues, can also affect the functioning of the starter.

3. The Starter Keeps Rotating After Disengaging the Ignition Key or Button

If the contact surfaces get progressively covered in melted and charred materials, it's a sign that the connection between the starter and the other components is broken.

The high currents that this issue can generate can further damage the entire system.

In addition, the melted and meshed surfaces of the starter's contact surface can also prevent the return spring from fully engaging the motor.

Some factors can cause a starter to spoil prematurely. Other factors can speed up the wear and tear on the component. These are a few reasons why the starter solenoid goes bad prematurely:

Excessive heat generated by the electric transmission can also cause a starter to malfunction.

This issue can lead to melting the Bendix and brushes, preventing the starter from properly connecting to the engine.

Most people over-tighten nuts and bolt sizes when it comes to their cars.

Doing so can damage the starter's inner and outer components, preventing it from properly connecting to the engine.

This can also cause shorting or mechanical failure if the starter attempts to start the vehicle.

When moisture enters your car's hood, it can affect the electric contacts of the starter.

It can cause corrosion, reducing conductivity and preventing the car's starting mechanism from working correctly.

Eventually, you'll hear a clicking sound when you start the vehicle, which is caused by insufficient power.

Poor and rushed wiring is another common cause of starter problems. This issue can lead to the electrical transmission failure of the car. This issue can cause shorting or electric shorts.

A straightforward example of this issue is when the car's owner incorrectly connects the terminals of the engine's components.

How Do You Fix a Bad Starter?

If you think your car's starter only malfunctioned because of a minor issue, you can usually fix it by fastening the loose connections of the vehicle's components.

However, more severe problems can require a professional diagnosis and replacement.

If you suspect the car's starter is defective, it's essential to establish that it's not the battery or the alternator. Before replacing the component, it's important to inspect its condition thoroughly.

Wearing protective gloves and performing a simple starter test using a multimeter are some steps that can be taken to identify a potential issue.

To test the multimeter's reading, locate the starter and connect the positive and negative terminals. After locating the car's starter, have someone start it to check the readings.

The starter is defective if the multimeter reads something that's not within this range. Also, if the reading is over 12v of the car's battery, the battery is failing.

Although you might not have a multimeter, you can still test the starter by connecting the two terminals of the device using a screwdriver.

If the starter's rotation does not usually occur, the device's contacts may no longer function as a switch.

Finding out you have a bad starter is the most challenging part, especially if you plan on replacing the wrong part alone.

However, it's generally a good idea to replace the entire starter. This will allow you to avoid experiencing further issues.

How To Start a Car With a Bad Starter

If you cannot start the car due to a faulty starter, it's essential to try and jump-start. This will allow you to check if the issue is related to the starter.

Before you jump-start the car, ensure the batteries are in good condition. Also, make sure that the car's electronic components are turned off.

Finally, you should have gloves and jumper cables to protect your hands while connecting the two batteries.

After connecting the two batteries:

After completing all of these steps, proceed and start the working car. Doing so will allow the non-functioning vehicle to borrow the energy from the battery in the functioning car.

Then, keep the vehicle running for a few minutes to allow the non-functioning one to recharge.