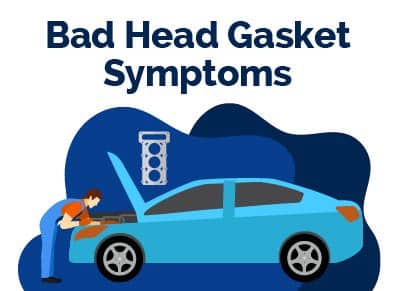 A blown head gasket is one of the most troubling issues faced by motorists, once their car engines have started aging.

Although blown head gaskets are not very common, they can fail at any time, and you need to know when this happens so you can take proactive measures to tackle it on time.

Let’s look at the various symptoms of a bad head gasket.

What Is a Head Gasket?

A head gasket is a type of specialty seal located between the cylinder head and the block of an internal combustion engine.

It seals against the flow of combustion gasses and prevents the transfer of oil and coolant into the engine's combustion chambers.

Depending on the type of engine and the cylinder arrangement, each of the vehicles' engines has around two head gaskets.

Inline and V configuration engines, respectively, feature only one cylinder head. On the other hand, in V-configuration vehicles, the engine features two individual cylinders.

In the past, various head gaskets were commonly used in production engines, such as those that featured copper or asbestos.

Today, most head gaskets are made of multi-layer steel, often coated with a rubber-based coating.

An engine's head gasket is usually placed between the block and the heads of the vehicle's internal combustion engine.

The head gasket is usually made of a torqued head bolt to ensure a tight and uniform seal.

The head bolt of an engine is also torqued in a specific way, typically involving working from the head's centermost bolt.

When the engine's temperature rises, the head gaskets might fail because they can't seal the newly expanded gap between the block and the cylinder head.

This issue can occur with specific motors, such as aluminum heads and iron cylinders.

In addition, some engines are designed with poor head bolt strength and are prone to experiencing issues such as head warping.

The following are symptoms of a bad head gasket:

A faulty fan, a clog in the radiator, or a leak in the cooling system can cause the engine to overheat.

On the other hand, a blown head gasket can drive the vehicle to overheat.

In addition, if the engine's temperature rises, the exhaust gasses or the liquid in the cooling system can leak into the cylinders.

If the vehicle is driven while it's hot, the cylinder head might warp or steam damage the catalytic converter. This issue can significantly increase the cost of repairs.

If the head gasket fails, the fuel or compressed air can escape through the cylinder head.

This issue can cause a reduction in the engine's power and result in a rough-running engine.

One of the most common signs of a bad head gasket is a thick layer of oil sludge on the underside of the dipstick or the oil filler cap.

This issue is caused by the transfer of fluids into the oil. Although it's not conclusive proof that the head gasket has failed, this condition indicates that the engine needs to be disassembled to identify the source of the contamination.

This condition can also be caused by antifreeze, which can contaminate the oil. Therefore, a clean and comprehensive oil flush is usually required to address this issue.

In addition to a new oil filter, this process also involves dismantling the entire bottom end of the engine to remove all the contaminated oil.

A faulty head gasket can cause white smoke to emanate from the exhaust. The presence of antifreeze usually causes this issue.

When this happens, it enters the cylinders, turning to steam and returning to the combustion chamber.

Less common is a leak from the oil passage to the cylinder. Blueish smoke might also appear.

If the head gasket fails, combustion pressure can enter the cooling or oil breather systems.

This issue might be caused by the sudden disconnection of the water outlet from the radiator hose.

A simple oil or coolant leak might occur if the head gasket has blown between the oil passage and the water line. This condition is less severe than a blown head gasket.

However, if the level of the coolant drops too far, this can lead to serious engine issues.

Another issue is that the oil can leak onto the hot exhaust, which can cause fires or an unpleasant smell.

What Does It Mean To "Blow" a Head Gasket?

A blown head gasket is caused by structural damage to a part of the head. This can prevent the proper sealing of the cylinder heads. This issue can manifest in various ways.

Depending on the condition of the head gasket, various issues can occur.

For instance, if the oil or coolant gets displaced into one of the engine's cylinders, this can cause the mixing of fluids.

A leaking head gasket can allow gasses to escape into the engine's cooling system or the combustion chamber itself.

On the other hand, if the head gasket has blown, combustion gasses can run through the blown head gasket.

A blown head gasket can also lead to various drivability issues. These can compound as the condition worsens.

Compression loss and overheating are the most common issues with this type of leak.

What Causes a Head Gasket To Fail?

A faulty head gasket can also cause various issues. However, overheating is the most common cause of these issues. This condition can lead to the sudden onset of problems related to the head.

The sudden expansion of metal along the internal surfaces of an engine's components can destroy the head gasket. Overheating can also cause severe damage to the head gasket.

Expanding the block deck or cylinder heads can also create a separation between the internal surfaces of the engine.

As a result, even if the head gasket has not been seriously damaged during the initial overheating incident, its integrity can be compromised.

When the air or fuel gets ignited outside of the flame front, detonation can also lead to the failure of the head gasket.

This issue can occur because of the damage to the firing rings of the head.

Can You Drive with a Blown Head Gasket?

Although driving with blown head gaskets is generally not recommended for most vehicles, they can be used in certain circumstances.

The seal between the cylinder head and the block is essential to the engine's performance. If the seal gets damaged, it can cause various problems.

A leaking head gasket can cause further problems, such as overheating. It can also lead to the loss of fluids, as well as through external or internal leakage.

A leaking head gasket can sometimes allow the mixture of fluids to get into the engine's lubrication oil.

This can cause a loss in oil viscosity, which can affect the critical components of an engine.

Although it's always expensive to replace a blown head gasket, the exact cost of repairs can vary depending on the model of the vehicle and the condition of the seal.

The cost of repairs can vary due to the type of vehicle and the amount of work required to replace the head gasket.

This range is reflective of the cost of the repair in an "inline-style" engine. The higher end of the spectrum is typically associated with high-end vehicles.

It's generally cheaper to spend a few dollars to fix a blown head gasket than several hundred dollars to replace it.

However, although the replacement part is not expensive, the process involved in reassembly and dismantling the entire seal can be very time-consuming and costly.

A head gasket can fail if your vehicle's cooling system is in poor condition.

One of the best ways to prevent this is to stop driving after your car overheats. If it begins to boil, stop and let it cool down for at least an hour.

One of the easiest ways to check your vehicle's cooling system is by opening the hood and checking all the pipes.

Doing so will allow you to see if there is a leak. You can also check the temperature and open the radiator's thermostat properly. Finally, make sure that the electric or mechanical fan is working correctly.

If you're still unsure if a head gasket is failing, try looking at the combustion gases from the cooling system.

This will allow you to determine if the compression has leaked into the system. Another way to check the cooling system is to remove the radiator cap.

Many older head gaskets fail due to their poor design or because they're not strong enough.

This issue was more familiar with older metal head gaskets, which would only last for a long time before they inevitably failed.