Honda Accord Vs Toyota Camry Reliability 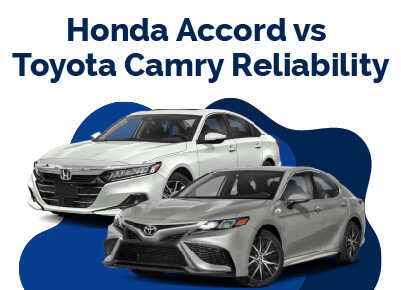 The rivalry between the Toyota Camry and the Honda Accord is one of the most significant car rivalries in the world. Even if you've never researched cars, you're almost certainly familiar with both models.

Due to the success of these two midsize cars, they have become some of the most popular passenger cars in the world. The Accord and the Toyota Camry are both very popular with both consumers and resale value.

In this comparison between the Honda Accord and the Toyota Camry, the popularity of these two cars is justified.

They come with various engines and are equipped with various safety features. They also offer a variety of in-car technologies that you'll most likely want.

The article covers Accord vs Camry in terms of reliability, safety, handling, et cetera.

Accord Vs. Camry Reliability: Detailed Comparisons

Which Is Better: Accord Vs. Camry?

While the Accord and the Toyota Camry come with relatively similar base and lower-trim models, the differences between these cars are most apparent in their upper-trim variants.

For instance, the Toyota Camry gets a peppier engine than the Accord and has an all-wheel drive option.

If you're still undecided about which model to choose, we recommend you try out the Toyota and Honda Accord before making a final decision.

Accord Vs. Camry Reliability: Price and Value

The Honda Accord is priced at around $24,970 to $36,900, excluding the $995 destination charge. The Accord has different trim levels and comes with various engines.

The Accord comes with two different types of 4-cylinder engines. The Sport 2.0T and the Touring are respectively bigger than the other two.

Some recent Accords come with a version of HondaLink connected services, but the most valuable features usually fall under the Touring trim levels.

If you have an Accord Hybrid or an Accord LX, you can use the app for HondaLink to schedule service appointments, get recall notifications, and summon roadside assistance.

The app for the Accord Hybrid and Sport also comes with additional features. For instance, it can be used to check the fuel level and mileage and notify you if a warning light is activated.

You can also send your favorite locations to the navigation system.

The Accord Touring and Accord Hybrid Touring come with various standard features, such as automatic collision notification and roadside assistance. These are all free for the first year of ownership.

New Honda Accord owners can enjoy various free features for the first three months of ownership. These include remote start and engine start, anti-theft alarm, geofencing, and a stolen vehicle alert.

In addition, the car comes with various additional features, such as a 24-hour live concierge service.

The Accord is regarded as one of the most desirable midsize cars in the US. According to the JD Power 2020 US Resale Value Awards, the current model of the Accord was the best-ranked car in this segment.

All models come with a standard four-cylinder engine. The exception is the TRD, which only comes with a V6 engine and is only offered in the XLE and XSE trim levels.

The Toyota Camry is also available with all-wheel drive. This feature is only available on four-cylinder models and adds around $1,400 to the bottom line.

Although most of Toyota's models come with connected services, the company doesn't deliver packages to your car.

The company's models, including the Toyota Camry Hybrid, have a free year of Safety Connect. This includes a variety of standard features, such as automatic collision notification.

Some of the lower trim levels of the Toyota Camry, such as the XLE and XSE, come with an optional one-year subscription to Remote Connect.

This allows you to start the engine, lock the doors, and track your vehicle in a parking lot. You can also keep track of your vehicle's maintenance, and safety recalls with a 10-year Service Connect subscription.

The Toyota Camry is also known for its resale value. According to the JD Power 2020 US Resale Value Awards, it was ranked second in the midsize car segment.

Accord Vs. Camry Reliability: Performance and Efficiency

The Honda Accord is also known for its smooth and powerful engines. Its recently updated models come with a 1.5-liter four-cylinder engine capable of producing 192 horsepower.

These cars are equipped with continuously variable transmissions, similar to automatic ones.

If you're looking for a more powerful engine, the Honda Accord Sport 2.0T and Touring models come with a 2.0-liter four-cylinder engine capable of producing 250 horsepower and 273 lb.-ft of torque. These cars are equipped with a 10-speed automatic transmission.

The Accord Hybrid features a two-motor hybrid system composed of a non-turbo 2.0-liter four-cylinder engine and a battery pack.

One of the motors is used to provide drive to the front wheels. The other motor is utilized as a clutch and electronic continuously variable transmission.

The hybrid version of the Accord is known for its fuel economy. It's a combined rating of 48 miles per gallon is impressive.

However, its fuel economy rating drops to 43 miles per gallon when the Touring version comes equipped with 19-inch wheels.

Toyota also offers three engines for the 2021 model year. Most buyers will opt for the company's 2.5-liter four-cylinder engine, which can produce up to 206 horsepower. Its torque ranges from 182 to 186 pounds-ft.

The Toyota models come with a standard 8-speed automatic transmission. Some buyers prefer all-wheel drive, geared toward those who want more winter-weather capability.

Toyota also offers a V6 engine capable of producing up to 301 horsepower. This is standard on the XSE and XLE models and is also available on the performance-oriented model known as the Toyota Camry TRD.

Toyota also offers a hybrid version of the car called the Toyota Camry Hybrid. This car features a different version of the company's four-cylinder engine, producing up to 176 horsepower. It's also equipped with a battery pack and two electric motors.

The LE version of the Toyota Camry Hybrid gets an impressive 52 miles per gallon. On the other hand, the more expensive trim levels have a combined fuel economy rating of 46 miles per gallon.

Accord Vs. Camry Reliability: Safety

The 2021 Honda Accord has various advanced driver assistance systems, including a forward collision warning system and an automatic emergency braking system.

It has multiple other features, such as a high-beam headlight control and traffic sign recognition.

Toyota's Safety Sense 2.5+ is standard on the 2021 Toyota Camry. Its advanced forward collision warning system is more sophisticated than the Honda Accord.

It can detect both cyclists and pedestrians in low-light conditions. It can also warn you if it senses imminent danger and intervenes.

Accord Vs. Camry Reliability: Infotainment and Technology

The 2021 Honda Accord is equipped with a variety of standard features designed to meet most buyers' needs. These include an 8-inch infotainment system, Apple CarPlay, and Android Auto integration.

The EX-L is offered a 10-speaker audio system and a three-month subscription to satellite radio. The EX-L and the Sport 2.0T models of the Accord don't have all of these features.

The base infotainment system of the 2021 Toyota Camry features a 7-inch display. It also comes with Apple CarPlay and Android Auto integration. Other standard features of the car include six audio speakers and two USB ports.

All Toyota car models can be upgraded to a 9-inch infotainment system standard or optional equipment. It has various features, such as a nine-inch audio system and factory navigation.

Accord Vs. Camry Reliability: Comfort and Utility

The base 2021 Accord features a variety of standard equipment, such as a push-button start, dual-zone climate control, and cloth upholstery.

The LE model of the Toyota car comes with a manual air-conditioning system, cloth upholstery, and a tilt and telescopic steering wheel.

Optional equipment such as dual-zone climate control and rear-seat air-conditioning units are also available on the model.

If you want a smart lock and unlock system that can automatically start your Accord when you exit or approach, you'll need to go to the Sport SE trim level.

The XLE model adds various features, such as an eight-way power passenger seat, ambient interior lighting, and leather upholstery. On the XSE and XLE, the front seats are heated and ventilated.

Accord Vs. Camry Reliability: Gas Mileage

Accord Vs. Camry Reliability: Engine

Accord Vs. Camry Reliability: Repairs and Maintenance

The Honda Accord and the Toyota Camry are both excellent cars. But the Accord edges the Camry based on the information supplied above.

This does not in any way suggest that the Camry is bad. As we said earlier, they are both excellent, and you can't go wrong with whatever option you make.